The Winner Of The UHY Haines Norton Study Scholarship 2019 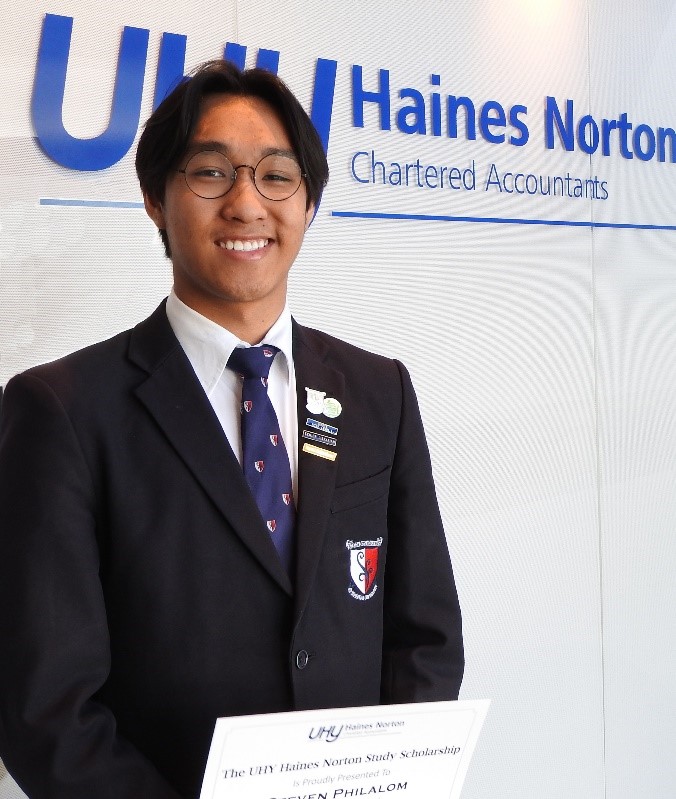 We are excited to announce that the winner of the UHY Study Scholarship 2019 is Steven Philalom from Kelston Boys High School (KBHS).

Steven has consistently aimed for academic excellence at KBHS, where he is a Prefect. He has a particular affinity for commerce-related subjects, excelling in Accounting, Economics and Statistics.

In addition to a consistently strong academic record, Steven has been heavily involved in many of the committees and groups at KBHS. His work with the Youth Cyber Zone has enabled him to help raise mental health awareness for youth. In particular, he has had the opportunity to work with younger students who were struggling but didn’t know how or where to go for help. Part of Steven’s role in the Youth Cyber Zone was to be someone who listened without judging, and direct them towards options for getting help. He has also loved being involved in organising events such as Pink Shirt Day to raise funds in support of anti-bullying, Awareness Weeks, and a Prefect leadership role at this year’s Year 9 camp.

Next year Steven plans to undertake a Bachelor of Commerce at Auckland University, majoring in accounting and information systems.

Steven’s parents met in a refugee camp in Laos, and took the opportunity to immigrate to New Zealand to provide a better life for their family. Coming from a refugee background has shaped Steven’s work ethic, as his parents have instilled in him the need to strive for academic excellence and take opportunities that were not available for them.

Steven was raised in West Auckland and loves the strong sense of community that the area has. He believes that West Aucklanders are generous and supportive of each other. “I have helped with on-street fundraising for the Cancer Society Daffodil Day several times,” says Steven. “I’ve noticed how generous people are, going out of their way to donate anything they can afford. I think West Aucklanders understand and relate to each other really well.”

In his spare time, Steven has a part time job at the local movie theatre – it’s the perfect job for him as he loves movies. He also enjoys reading and was a Librarian at KBHS.

I asked Steven what is important to him: “Family. Friends. Having good mental health. And having a sustainable future”.

UHY Haines Norton congratulates Steven on being the UHY Study Scholarship 2019 recipient. We are excited to watch his tertiary journey and see where his studies will take him.